All of us at Sachiyo Ito and Company/Dancejapan wish you peace, good health and joy in the New Year!

In 2018, thanks to your enduring support, we were able to complete our mile stone, the 20th Year Season of Salon Series, the on-going series of performances and lecture demonstrations on the performing arts of Japan. With world class guest artists and speakers, the program has artistically and intellectually educated and inspired NY audiences. Under the theme of the future generation of traditional performing arts”, three programs of Salon Series were presented and enjoyed by our supporting audiences: Japanese Dance and Experimental Workshop and Forum for the Very Young; Traditional Japanese Dance and Theater in Contemporary Performing Arts; Expression in Traditional and Contemporary Japanese Dance; and enjoyed by our supporting audiences. 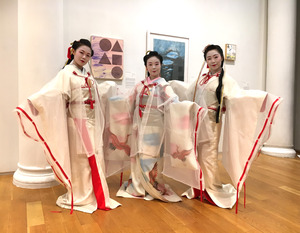 For the 2019 Salon Series, the following  topics are planned:

Salon Series #64: Dances   and Cultures of the Himalayas and  Japan on March 17;

As an NPO, our mission is to continue to serve our community of New York. Your tax-deductible donations will be greatly appreciated and will  help us meet our mission and achieve our aspirations. Donations may be made through the secure PayPal link on our website.

From the Comments on Salon Series 20th Year Season:

“It was both a privilege and a great joy to attend your magnificent performance today.
I particularly love your solo “To the Sea”; it conveys a feeling of eternity and continuity
to me.  Your movement is subtle, delicate, but unforgettable.” -Christa Meadows

“Lovely theme – water – well interpreted by Ito Sensei’s fans in her solo, cranes were most elegant and calming to watch.”–Dalienne Majors

“It was awesome!” -Jong Koo Lee